A child's dgestive system consists of parts of the body working together to change the food and liquids we eat and drink, into the fuel and building blocks our bodies need. Digestion, the process of breaking down food, may take several hours to a few days, depending on what you eat. Each body part in the digestive system:  mouth, esophagus, stomach, small intestine, pancreas, liver, gallbladder, large intestine, colon, and rectum, plays an important role in digestion.

Anatomy and Function of a Child's Digestive System

The mouth starts the digestive process by producing saliva (suh-LYE-vuh), even before eating begins.  Thinking about, or seeing a tasty food will trigger saliva (spit) to form, beginning the digestive process. As food enters the mouth, it is broken down into smaller pieces by your teeth, while the tongue aides in the mixing process. Processed food in the mouth, ready to be swallowed, is called a bolus (BO-luss). The bolus will pass into the back of the throat, and on to the second part of the digestive track, the esophagus. 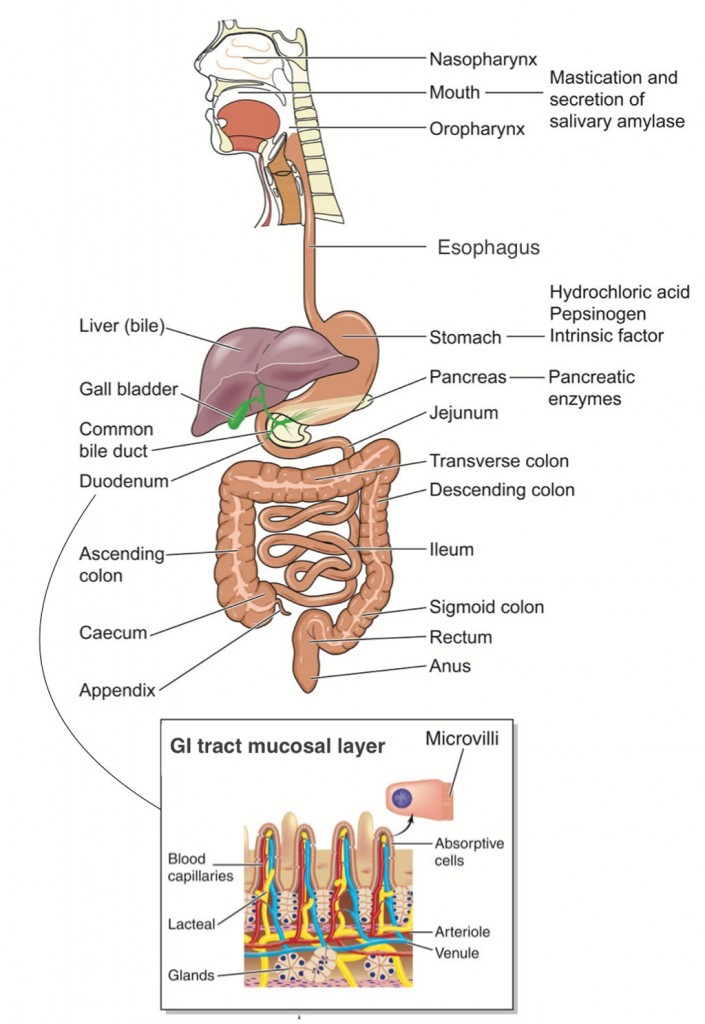 The esophagus (ih-SOF-eh-guss) is a stretchy tube approximately 10 inches (25 centimeters) long in adults, that moves food from the throat to the stomach.  Muscular contractions in the walls of the esophagus continue the digestive process by slowly squeezing the food until it reaches the stomach, in about two to three seconds.

The esophagus is one of two tubes, or pipes, extending from the back of the throat. The second tube is the windpipe that allows air intake, but also blocks food from entering it. At the top of the windpipe is a special flap called the epiglottis (ep-ih-GLOT-iss), which opens when you breathe and closes when food is swallowed to ensure that food goes into the esophagus, rather than the windpipe, as it travels to your stomach.  Occasionally, the epiglottis does not close entirely, such as when a person eats too fast, which will cause involuntary coughing.  Coughing clears the windpipe of any food that accidentally entered it.  When this happens, you will often hear it referred to as "going down the wrong pipe".

The stomach, a hollow, stretchy sack similar in shape to the letter J, is attached to the end of the esophagus.  The stomach has three important tasks:

Stomach muscles continue the digestive process by churning and mashing the food into a more usable form.  Enzymes in the gastric (GAS-trik) juices secreted from glands in the stomach walls, aid the breakdown process and help kill bacteria that may have been eaten. From here, the food is very liquid and ready to be released to the small intestine.

The small intestine (in-TESS-tin) is a tightly packed tube in the abdomen, below the stomach. It measures approximately 1½ to 2 inches (about 3.5 to 5 cm) around and if stretched out, is about 20 feet (6 m) long in adults. The top end connects to the stomach, the bottom end to the large intestine (colon). The lining of the small intestine is made of tiny, finger-shaped tissues called villi (VIL-le). These raised tissues increase the surface area of the small intestine where calories and nutrients from the food consumed, will be digested and absorbed.

Food may spend as long as four hours in the small intestine. After the nutrients are absorbed, the leftover food residue is passed into the large intestine, or colon.

The large intestine is also packed into the body, and would measure approximately 5 feet (about 1.5 meters) long if spread out.  It is larger around and a highly specialized organ where water is eliminated and waste is processed so it can be eliminated easily through the rectum (REK-tum).

Our offices are conveniently located in Frisco and Southlake, TX. We are dedicated to providing the highest quality of patient care. Dr. Dave and her staff work extremely hard to streamline the referral process, expedite appointment scheduling, and promptly respond to patient calls. Her practice offers a pure pediatric environment. A pediatric trained professional handles … END_OF_DOCUMENT_TOKEN_TO_BE_REPLACED

Abdominal (belly) pain in children is a common condition and, while not generally a serious problem, one that can cause considerable discomfort. Approximately 30% of children visit a doctor due to abdominal pain by age 15, and 10-15% of school aged children report recurring abdominal pain. Because abdominal pain can have a wide variety of causes, diagnosis can often be … END_OF_DOCUMENT_TOKEN_TO_BE_REPLACED

The word “hug” comes from the word “hugga” meaning “to comfort” in the Old Norse language. What … END_OF_DOCUMENT_TOKEN_TO_BE_REPLACED

Here’s to a Happy Immune System in 2022! Your immune system is highly intelligent! Many of us do … END_OF_DOCUMENT_TOKEN_TO_BE_REPLACED