Gastroesophageal reflux disease (GERD) in children is a digestive disorder in which the gastric acid from the stomach moves upward into the esophagus. Most people have gastric acid reflux occasionally, however, if reflux is occurring frequently, it can develop into GERD.

Gastroesophageal reflux (GER) is the result of a malfunctioning valve at the end of the esophagus. This lower esophageal sphincter (LES) muscle normally opens and closes to allow food into the stomach. If the muscle opens, or relaxes, longer or more often than it should, stomach acid refluxes into the esophagus. This reflux can cause heartburn or vomiting. If reflux enters the throat, trachea (wind pipe) it is referred to as laryngopharyngeal reflux, which results in throat clearing, throat pain, coughing and chest congestion.

GER is a common occurrence in infants, with more than 50% of children 3 months or younger having at least one vomiting episode per day. The majority of babies outgrow GER by age 1 due to increased muscle control.

Older children who are experiencing GER need to be evaluated by a doctor to determine the cause of the problem and receive treatment.

Heartburn is the most common symptom of GERD in adults, but children may or may not experience heartburn. When they do, they often have difficulty describing the sensation. Children with GERD typically complain of tummy pain or chest discomfort, most frequently after meals. Common symptoms of GERD include digestive and pulmonary symptoms:

Causes of GERD in children are typically different than the causes for infants or adults. Anything that increases pressure below the lower esophageal sphincter (LES) can contribute to a child having GERD, including:

Diagnosing GERD in a child can usually be done by a physical examination of the child and interviewing the child's caregiver. In some instances, further testing may be recommended. These include:

If your child is an infant, treatment will generally be focused on lessening symptoms, as the underlying problem typically resolves itself in time. Some successful measures used to reduce symptoms are: 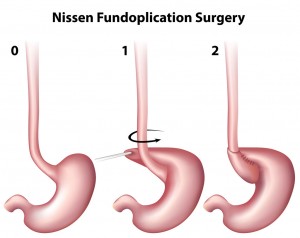 In extremely rare cases, a child may require antireflux surgery (Nissen Fundoplication) to correct GERD when symptoms do not respond to medical therapy. The anti-reflux surgery tightens the muscles at the bottom of the food pipe (esophagus), the tube that carries food from the mouth to the stomach. In this surgical procedure the surgeon will use stitches to wrap the upper part of your child's stomach around the end of the esophagus. This helps prevent stomach acid and food from flowing back up.

If you are concerned that your child may have GERD or is experiencing symptoms of GERD, please set up an appointment with our office.

Our offices are conveniently located in Frisco and Southlake, TX. We are dedicated to providing the highest quality of patient care. Dr. Dave and her staff work extremely hard to streamline the referral process, expedite appointment scheduling, and promptly respond to patient calls. Her practice offers a pure pediatric environment. A pediatric trained professional handles … END_OF_DOCUMENT_TOKEN_TO_BE_REPLACED

Abdominal (belly) pain in children is a common condition and, while not generally a serious problem, one that can cause considerable discomfort. Approximately 30% of children visit a doctor due to abdominal pain by age 15, and 10-15% of school aged children report recurring abdominal pain. Because abdominal pain can have a wide variety of causes, diagnosis can often be … END_OF_DOCUMENT_TOKEN_TO_BE_REPLACED

The word “hug” comes from the word “hugga” meaning “to comfort” in the Old Norse language. What … END_OF_DOCUMENT_TOKEN_TO_BE_REPLACED

Here’s to a Happy Immune System in 2022! Your immune system is highly intelligent! Many of us do … END_OF_DOCUMENT_TOKEN_TO_BE_REPLACED