You are here: Home / Digestive Disorders in Children / Peptic Ulcer in Children 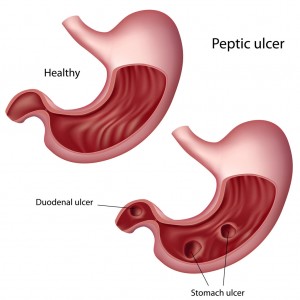 We now know that  peptic ulcers in children are caused by a particular bacterial infection in the stomach and upper intestine and by certain medications like nonsteroidal anti-inflammatory drugs (NSAIDs).  However, for almost 100 years, doctors thought that mental stress and spicy foods caused most ulcers. 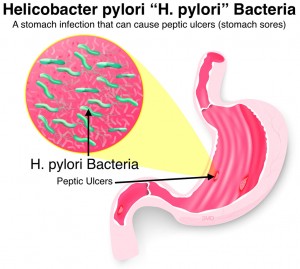 Causes of Peptic Ulcers in Children

The two main causes of peptic ulcers are infection with Helicobacter pylori (H. pylori) bacteria and the use of nonsteroidal anti-inflammatory drugs (NSAIDs), such as aspirin and ibuprofen.

H. pylori is a bacterial infection which can be present with no symptoms for a long period of time, but can lead to digestive illness if left untreated. It is typically contracted through food, water, or contact with an infected person. H. pylori can weaken the stomach’s protective lining, which can allow acid, as well as the bacteria, to irritate the stomach and create an ulcer.

Nonsteroidal anti-inflammatory drugs, such as  aspirin and ibuprofen, can also be a contributor to peptic ulcers. While most children who take NSAIDs do not develop ulcers, some can develop bleeding or gastrointestinal problems with only moderate usage. Acetaminophen can be used as an alternative for pain control, as it will not cause ulcers because it is not a NSAID. 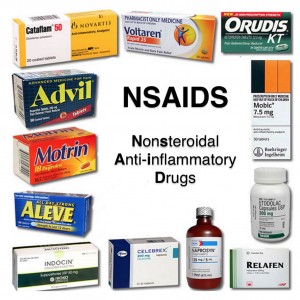 In extremely rare cases in adults, peptic ulcers can be caused by Zollinger-Ellison syndrome, a cancer which causes excess stomach acid production.

Symptoms of Peptic Ulcers in Children

The most common symptom of a peptic ulcer is a gnawing or burning pain just below the breastbone. Because ulcers typically heal and recur, the pain often lasts for days or weeks, then goes away for a time. Ulcer pain tends to flare up on an empty stomach and subside with food or milk intake or with antacids. Other symptoms of peptic ulcers include:

Children may show no signs at all unless a complication occurs, such as:

While many symptoms of peptic ulcers are common to other childhood illnesses, you should contact your doctor if you feel that your child may have an ulcer or other gastrointestinal condition. 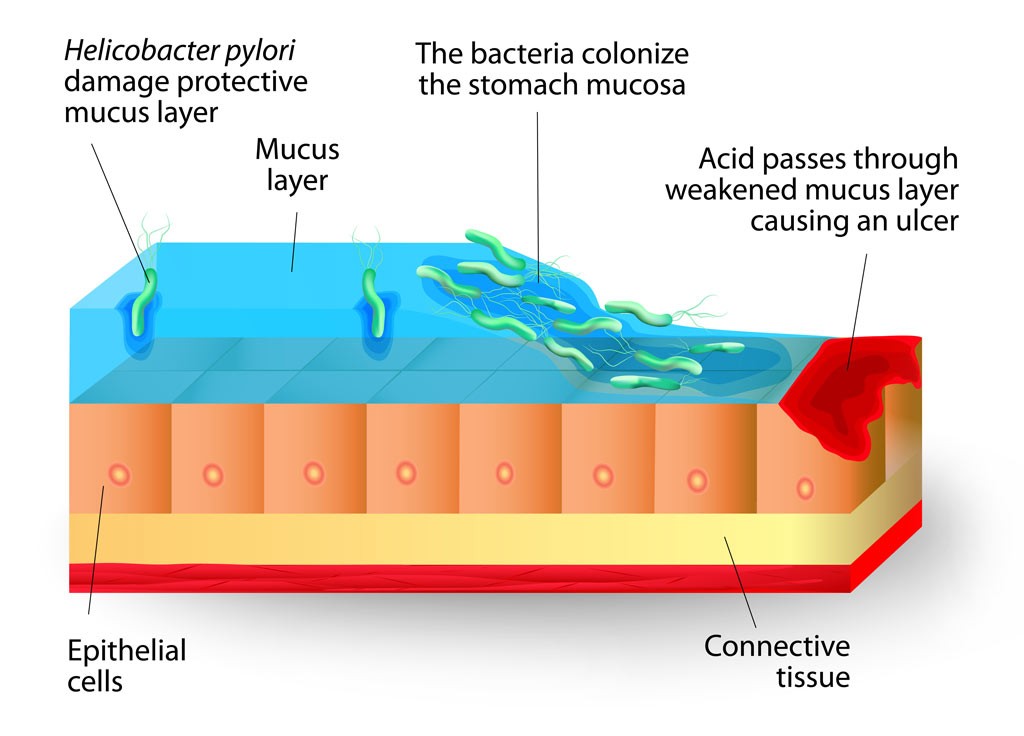 Determining the cause of a peptic ulcer is as important as confirming the diagnosis. If an ulcer is suspected, your doctor may recommend diagnostic testing, including:

Treatment for a peptic ulcer will depend on the cause of the ulcer. Regardless of the source of your child’s ulcer, your doctor will probably recommend some type of acid suppressor or neutralizer to reduce pain. Common treatments for ulcers include:

If your child is diagnosed with a peptic ulcer caused by H. pylori, it is important to administer the entire course of antibiotics. Dietary restrictions are not usually required unless specific foods are bothersome. Keeping a regular meal schedule will ensure that your child’s stomach doesn’t get empty, which can cause discomfort. Your doctor may also recommend:

If you would like more information about gastrointestinal (GI) digestive disorders and nutrition in children, please contact Dr. Mona Dave’s Frisco Office or Southlake Office.

Our offices are conveniently located in Frisco and Southlake, TX. We are dedicated to providing the highest quality of patient care. Dr. Dave and her staff work extremely hard to streamline the referral process, expedite appointment scheduling, and promptly respond to patient calls. Her practice offers a pure pediatric environment. A pediatric trained professional handles … END_OF_DOCUMENT_TOKEN_TO_BE_REPLACED

Abdominal (belly) pain in children is a common condition and, while not generally a serious problem, one that can cause considerable discomfort. Approximately 30% of children visit a doctor due to abdominal pain by age 15, and 10-15% of school aged children report recurring abdominal pain. Because abdominal pain can have a wide variety of causes, diagnosis can often be … END_OF_DOCUMENT_TOKEN_TO_BE_REPLACED

Research shows that when you Squat to Poop: Pressure in the belly is lowerLess straining is … END_OF_DOCUMENT_TOKEN_TO_BE_REPLACED

Scientific studies show that listening to music provides specific benefits to the body. My … END_OF_DOCUMENT_TOKEN_TO_BE_REPLACED