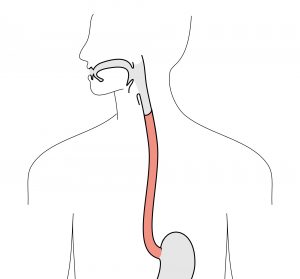 Does your child have trouble swallowing or does food get stuck going down? Is your child a picky eater or prefers to eat soft foods or drink liquids instead of regular food? Does your child complain about food coming back up into the throat? If so, your child may have a digestive disorder known as eosinophilic esophagitis.

What Is Eosinophilic Esophagitis (EoE)?

An eosinophil is a type of white blood cell. The esophagus (the tube that connects the mouth to the stomach) does not normally have any eosinophils. When children eat food that they are allergic to, eosinophils will be recruited and attach to the inner lining of the esophagus. As eosinophils accumulate over time, the esophagus will become damaged, inflamed, and swollen, making it difficult to swallow.

EoE is not an immediate, life-threatening allergy. Most of us have heard of the emergency allergic reactions that happen in children when they eat a food such as peanuts. However, many allergic reactions, such as EoE, can come on slowly and present with various symptoms over time. Since EoE can take time to develop, it is often mistaken for acid reflux. If your child has been tried on acid reflux medication and is not improving, then speak to your child’s doctor about a further evaluation.

Symptoms of EoE include:

Who Can Get EoE?

Children of all ages and all ethnic backgrounds can have EoE. However, it is more common in males than females. Children with EoE also tend to have other allergic features such as asthma, environmental allergies, and eczema. 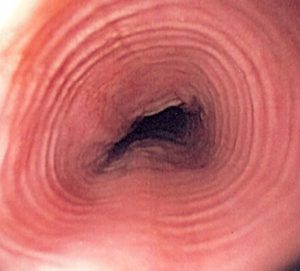 How Is EoE Diagnosed?

Currently, the only way to diagnose EoE is through an upper endoscopy with biopsies. This procedure is performed by a pediatric gastroenterologist. Often times, the esophagus will contain white plaques, rings, or an appearance of cracked lines and the biopsies from the esophagus reveal the eosinophils.

What Is the Treatment for EoE?

There is currently no single, one accepted therapy to treat EoE. It is important to work with your child’s physician to discuss various treatment options and then decide what is best for your child.

Six-Food Elimination Diets
Eliminating the six major food allergens from the diet that have been linked to EoE has been shown to eliminate the eosinophils and control symptoms. The top six food allergens include dairy, soy, egg, wheat, all nuts, and fish. Over time, the foods are added back one at a time with follow-up endoscopies to make sure the EoE is under control.

Elemental Diets
The child receives a special formula that only contains amino acids and all other foods are removed from the diet. This type of diet is typically used in very young children or in children not responding to other forms of treatment.

If you are concerned that your child has EoE, then speak to your child’s physician. If you would like more information about gastrointestinal (GI) digestive disorders and nutrition in children, please contact Dr. Mona Dave’s Plano Office or Southlake Office.

Our offices are convienently located in Plano and Southlake, TX. We are dedicated to providing the highest quality of patient care. Dr. Dave and her staff work extremely hard to streamline the referral process, expedite appointment scheduling, and promptly respond to patient calls. Her practice offers a pure pediatric environment. A pediatric trained … END_OF_DOCUMENT_TOKEN_TO_BE_REPLACED

Abdominal (belly) pain in children is a common condition and, while not generally a serious problem, one that can cause considerable discomfort. Approximately 30% of children visit a doctor due to abdominal pain by age 15, and 10-15% of school aged children report recurring abdominal pain. Because abdominal pain can have a wide variety of causes, diagnosis can often be … END_OF_DOCUMENT_TOKEN_TO_BE_REPLACED

You are what you eat! Your health is directly related to the types of foods that go into your … END_OF_DOCUMENT_TOKEN_TO_BE_REPLACED

This week, we’ll be hosting our first ever live Q&A webinar!  Walk with a Doc will be … END_OF_DOCUMENT_TOKEN_TO_BE_REPLACED