You are here: Home / Gastroenterology / MiraLAX: Is It Safe for Your Child? 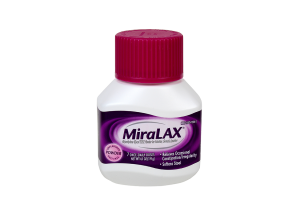 Recently there has been a wave of media coverage questioning the safety of MiraLAX (also known as polyethylene glycol 3350 or PEG 3350) and other laxatives that contain PEG 3350. This media coverage has been accompanied by questions and concerns from parents whose children are being treated effectively for chronic constipation with PEG 3350.

The North American Society for Pediatric Gastroenterology, Hepatology, and Nutrition (NASPGHAN) has provided answers to these frequently asked questions.

Polyethylene glycol (PEG) is a water-soluble, inactive ingredient of which only a very small amount is absorbed in the gut or gastrointestinal tract—the rest moves through the body. PEG is nontoxic and has no effect on the body. It is used in many products including medications, such as ointments and pills, to allow them to be more easily dissolved in water. PEG can also be found in common household products, such as certain brands of skin creams and toothpaste. PEG 3350 is the most commonly used form of PEG in the United States and Canada for the treatment of constipation and is the focus of discussion in this FAQ. Commonly used brand names of PEG 3350 available in the United States and Canada are MiraLAX, GlycoLax, Lax-A-Day, and RestoraLAX.

PEG 3350 helps constipation by holding more water in the bowel, making stool softer and easier to pass. The effect of PEG 3350 is not immediate and may take 24 hours or more to work.

Yes. The effectiveness of PEG 3350 in treating constipation in children has been supported by several randomized controlled trials (these types of trials are considered the “gold standard” in assessing how well a medication works). It has been shown to be more effective than placebo (sugar pill) and other laxatives, such as lactulose and milk of magnesia.

No. PEG 3350 works by keeping more water in the stool so it is softer and easier to pass. It does not work on the nerves or muscles of the gut and so does not cause any dependence or damage.

In general, PEG 3350 is well tolerated in children and adults, but may cause loose, watery, or more frequent bowel movements. The most common side effects reported by patients include nausea, bloating, cramping, or gas.

Several research studies have shown PEG 3350 to be safe in children when used for several weeks to several months. Currently there have been no studies specifically on the use and safety of PEG 3350 in children for longer periods of time. In clinical practice, however, it is common for pediatric gastroenterologists to prescribe PEG 3350 for chronic use, and there have been no reports of serious, long-term side effects in the medical literature.

Studies of PEG 3350 in adults and children have generally shown it to be safe. PEG 3350 has not been associated with electrolyte imbalances or problems in liver or kidney functioning when used in the short term or at high doses for bowel preparation for colonoscopy. Animal studies using PEG 3350 at higher doses or for longer periods of time have also not reported any significant side effects.

The FDA is interested in investigating the safety of PEG 3350 use in children and for prolonged periods. Although PEG 3350 is a very large molecule which is not absorbed by the gut due to its size, there are concerns that smaller compounds, such as ethylene glycol or diethylene glycol, could be found as impurities in the manufacturing process of PEG 3350 or formed when PEG 3350 is broken down within the body. The FDA is investigating if these smaller compounds are absorbed by the gut and accumulated in the bodies of children taking PEG 3350. Some families have reported concerns to the FDA that some neurologic or behavioral symptoms in children may be related to taking PEG 3350. It is unclear whether these side effects are due to PEG 3350. This study is the first step towards trying to determine if there is truly a link.

PEG 3350 should be used with caution in patients with certain medical problems, including (but not limited to) electrolyte imbalances, renal dysfunction, and seizure disorders, or patients with certain gastrointestinal problems, including gastrointestinal obstruction, toxic megacolon, or bowel perforation. The long-term effect of taking PEG 3350 is not known in children with chronic intestinal inflammation or injury. PEG 3350 should also be used with caution in patients who are pregnant or taking digoxin (a medicine for heart disease).

Multiple options are available for treatment of constipation in children. Stool softeners, stimulant laxatives, dietary changes, and behavior modification are used alone or in combination, but evidence regarding the effectiveness of specific treatments is limited. Other medications for control of constipation include lactulose (a synthetic, nondigestible sugar), milk of magnesia/magnesium hydroxide, mineral oil, or stimulant laxatives (senna, bisacodyl). Questions about potential risks of each medication should be discussed with your child’s health care provider.

Generally speaking, if your child has been prescribed PEG 3350 as part of his/her treatment plan, and you feel this medicine provides benefit, you should feel safe continuing PEG 3350. At this time, PEG 3350 appears to be safe based on current medical literature. We recommend discussing any concerns you have about the safety of PEG 3350 with your child’s health care provider. If you would prefer for your child to stop taking PEG 3350, discuss other treatments options with your child’s health care team before stopping PEG 3350 therapy. Although abruptly stopping PEG 3350 is not considered dangerous, it could lead to a relapse/worsening of constipation.

Our offices are convienently located in Plano and Southlake, TX. We are dedicated to providing the highest quality of patient care. Dr. Dave and her staff work extremely hard to streamline the referral process, expedite appointment scheduling, and promptly respond to patient calls. Her practice offers a pure pediatric environment. A pediatric trained … END_OF_DOCUMENT_TOKEN_TO_BE_REPLACED

Abdominal (belly) pain in children is a common condition and, while not generally a serious problem, one that can cause considerable discomfort. Approximately 30% of children visit a doctor due to abdominal pain by age 15, and 10-15% of school aged children report recurring abdominal pain. Because abdominal pain can have a wide variety of causes, diagnosis can often be … END_OF_DOCUMENT_TOKEN_TO_BE_REPLACED

My mom, pediatrician, Dr. Kiran Harpavat, is 72 years and going strong!  When the pandemic … END_OF_DOCUMENT_TOKEN_TO_BE_REPLACED

Exercise reduces the risks of many diseases, including coronary heart disease, breast and colon … END_OF_DOCUMENT_TOKEN_TO_BE_REPLACED