You are here: Home / Gastroenterology / How Bullying at School Can Potentially Trigger Abdominal Pain in Your Child 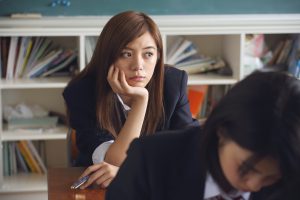 Earlier this week I saw a 12-year-old girl for a follow-up visit. I initially saw her in May of this year. She came to see me because of worsening abdominal pain despite an extensive evaluation with her pediatrician. I performed additional tests including an upper and lower endoscopy and could not come up with an explanation for her pain. She also complained of headaches and fatigue. I recommended some simple dietary changes, probiotics, antispasmodics and close follow up. Her pain seemed to gradually improve in June and she was doing well until last week. Her abdominal pain, headaches, and fatigue started to return. The parents became concerned and frustrated because school is starting in two weeks and they want to make sure we figure out what is wrong before school starts. She had missed many days of school last year and they did not want the cycle to be repeated.

I went over a detailed health history with the parents and child and after examining her, I had the parents step out while I spoke to her alone. She reported that her summer and been fun. She had traveled quite a bit and did not have abdominal pain. We talked about the start of the school year, friends, classmates, what to expect and any anticipation she might be feeling. From our conversation, it became apparent that she had been bullied the last school year and was afraid of returning to school. With my help, she was able to explain to her parents what had happened. The parents were shocked that bullying was the source of her abdominal pain but they have made plans to discuss the situation with the school prior to the start of the school year.

Bullying can take an emotional and physical toll on its victims. Studies have shown that bullying can present as psychosomatic complaints such as:

Bullying is unwanted, aggressive behavior that involves a power imbalance.

The behavior is repetitive.

The Three Types of Bullying:

Where Does Bullying Happen?

Cyberbullying is bullying that involves technology. Cyberbullying can occur anytime in the day or night even when a child is alone.

How to Prevent Cyberbullying:

Reasons Why Children Do Not Always Seek Help:

Studies show that 20-30% of all children are bullied but only 1/3 of them report it to an adult.

The effects of bullying can be devastating to children of all ages. As our children go back to school this month, it is crucial that parents remain watchful and involved so bullying can be stopped at an early stage. If you would like more information about gastrointestinal (GI) digestive disorders and nutrition in children, please contact Dr. Mona Dave’s Plano Office or Southlake Office.

Our offices are convienently located in Plano and Southlake, TX. We are dedicated to providing the highest quality of patient care. Dr. Dave and her staff work extremely hard to streamline the referral process, expedite appointment scheduling, and promptly respond to patient calls. Her practice offers a pure pediatric environment. A pediatric trained … END_OF_DOCUMENT_TOKEN_TO_BE_REPLACED

Abdominal (belly) pain in children is a common condition and, while not generally a serious problem, one that can cause considerable discomfort. Approximately 30% of children visit a doctor due to abdominal pain by age 15, and 10-15% of school aged children report recurring abdominal pain. Because abdominal pain can have a wide variety of causes, diagnosis can often be … END_OF_DOCUMENT_TOKEN_TO_BE_REPLACED

My mom, pediatrician, Dr. Kiran Harpavat, is 72 years and going strong!  When the pandemic … END_OF_DOCUMENT_TOKEN_TO_BE_REPLACED

Exercise reduces the risks of many diseases, including coronary heart disease, breast and colon … END_OF_DOCUMENT_TOKEN_TO_BE_REPLACED