You are here: Home / Gastroenterology / The Puking Infant 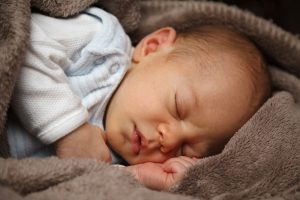 The mother of a 6-week-old infant was concerned because her daughter was always throwing up. She was initially breast-feeding the baby but then switched to formula when the baby reached three weeks of age, thinking it may help with the spitting up. Initially the spitting up decreased for a few days, but then it became more frequent. The mother tried several other formulas with no improvement. The infant was happy but always seemed to be hungry. Over the course of one week, the spitting up became more frequent and forceful. The mother became extremely concerned because, by six weeks of age, her daughter was having projectile vomiting with every feeding and could barely keep down any formula. She was seen by her doctor and an ultrasound was ordered which immediately revealed the problem.

The muscle in the lower part of the stomach, the pylorus, had slowly become enlarged and caused a narrowing to the point that formula was not able to empty from the stomach. This is called pyloric stenosis.

Pyloric stenosis is a condition that can affect the digestive tract during infancy. Essentially, it is a blockage from the stomach to the small intestine.

Causes and Signs of Pyloric Stenosis

The pylorus, the muscular valve between the stomach and small intestine, becomes abnormally thickened and does not allow the stomach contents to empty. This leads to forceful vomiting, dehydration, and weight loss. Infants with pylorus stenosis often act excessively hungry since they keep vomiting their milk. The exact cause of the thickening of the pylorus muscle is not known, but it has been associated with using the antibiotic erythromycin toward the end of pregnancy and within the first two weeks of the infant’s life.

How It’s Diagnosed and Treated

There are two main ways to diagnose pyloric stenosis:

The treatment for pyloric stenosis is a pyloromyotomy. This is a surgical procedure that involves cutting through the thickened pylorus muscle so the blockage is relieved. Most babies are able to resume feedings within a few hours after the surgery.

What Happened to the Puking Baby?

The ultrasound revealed a severely thickened pylorus muscle. The diagnosis of pylorus stenosis was made and the patient was admitted to the hospital. A pyloromyotomy was performed successfully by the pediatric surgeons. The infant was started on bottle feedings and went home the next day without any further vomiting.

If you are concerned that your infant may have pyloric stenosis, then please speak to your child’s doctor. If you would like more information about gastrointestinal (GI) digestive disorders and nutrition in children, please contact Dr. Mona Dave’s Plano Office or Southlake Office.

Our offices are convienently located in Plano and Southlake, TX. We are dedicated to providing the highest quality of patient care. Dr. Dave and her staff work extremely hard to streamline the referral process, expedite appointment scheduling, and promptly respond to patient calls. Her practice offers a pure pediatric environment. A pediatric trained … END_OF_DOCUMENT_TOKEN_TO_BE_REPLACED

Abdominal (belly) pain in children is a common condition and, while not generally a serious problem, one that can cause considerable discomfort. Approximately 30% of children visit a doctor due to abdominal pain by age 15, and 10-15% of school aged children report recurring abdominal pain. Because abdominal pain can have a wide variety of causes, diagnosis can often be … END_OF_DOCUMENT_TOKEN_TO_BE_REPLACED

You are what you eat! Your health is directly related to the types of foods that go into your … END_OF_DOCUMENT_TOKEN_TO_BE_REPLACED

This week, we’ll be hosting our first ever live Q&A webinar!  Walk with a Doc will be … END_OF_DOCUMENT_TOKEN_TO_BE_REPLACED