You are here: Home / Gastroenterology / Occupational Therapist and Gastrointestinal Issues 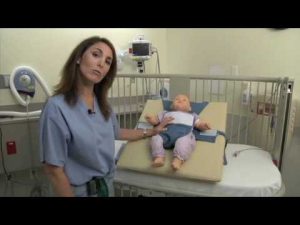 The role of the Occupational Therapist (OT) is to help patients of all ages improve or maintain skills for day-to-day activities and well-being. OTs work in a variety of fields with different patient populations.

Pediatric OTs work with infants and children who have gross motor delays, fine motor delays, or difficulty swallowing and eating, which in turn can contribute to difficulties with activities of daily living.

There is now a new area of specialization where OTs can treat premature and sick infants in the neonatal intensive care unit (NICU). The American Occupational Therapy Association first recognized board certification for neonatal therapists in March of 2017. Robynne Rembecki is 1 of 55 Occupational Therapists in the nation who became a Certified Neonatal Therapist in the first certification group.

As a Certified Neonatal Therapist, I have the pleasure of working with multi-disciplinary teams who treat infants born prematurely.  These infants have conditions that can impact their ability to drink and swallow safely. Many of these infants have gastroesophageal reflux in addition to feeding difficulties. Moderate to severe reflux can contribute to irritability, difficulty sleeping, and poor overall intake. I have observed infants who completely stop eating because of severe reflux.  Neonatologists are often hesitant to use medication or thickening with premature and sick infants because of possible side effects.  Therefore, elevation is the least invasive option for treatment. Elevation can help alleviate some of the reflux symptoms until the patient can see a Pediatric Gastroenterologist (link to my website) for comprehensive evaluation and treatment.

My son Drew was born early and had severe reflux as an infant.  Medication helped relieve some of his reflux symptoms. Even though Drew felt better, he still had difficulty sleeping and was spitting up often. I placed Drew on a commercial triangular reflux wedge used for infants, and he began to sleep much better at night. His episodes of spit up decreased significantly. Drew’s reflux symptoms greatly improved, but because he spent a lot of time on that wedge, he developed new orthopedic issues including flattening on the back of his head and very tight shoulders.  These new issues made Drew’s ability to play and interact with toys and objects in front of him very difficult. Drew had to go see a physical therapist to address orthopedic issues he developed from poor positioning.

As a pediatric occupational therapist, I knew there had to be a better way of addressing infant reflux without having musculoskeletal problems. That triangular foam wedge was placed on my kitchen island, and out came the electric carving knife! I carved out the wedge to make a more orthopedically friendly positioning device. I took it back to the NICU and placed babies on it. Not only did it help with their reflux but the babies were sleeping better too. With some additional help, I made the wedge reversible with a “nest” on the other side and named it the RES-Q Infant Wedge.  The RES-Q Infant Wedge is an FDA registered medical device that has been sold commercially since 2003.

Watch this video to learn more.

As a pediatric occupational therapist and certified neonatal therapist, I always teach my patients about the importance of practicing safe sleep by placing infants to sleep on their backs, with the head of the bed down flat. When an infant is NOT safe with head of bed down because of reflux or other conditions, I recommend that the parents discuss other options with their physician, and consider consultation with a Pediatric Gastroenterologist as well as elevation on an FDA registered medical device.

If you would like more information about gastroesophageal reflux or gastrointestinal (GI) digestive disorders and nutrition in children, please contact Dr. Mona Dave’s Plano Office or Southlake Office.

Our offices are convienently located in Plano and Southlake, TX. We are dedicated to providing the highest quality of patient care. Dr. Dave and her staff work extremely hard to streamline the referral process, expedite appointment scheduling, and promptly respond to patient calls. Her practice offers a pure pediatric environment. A pediatric trained … END_OF_DOCUMENT_TOKEN_TO_BE_REPLACED

Abdominal (belly) pain in children is a common condition and, while not generally a serious problem, one that can cause considerable discomfort. Approximately 30% of children visit a doctor due to abdominal pain by age 15, and 10-15% of school aged children report recurring abdominal pain. Because abdominal pain can have a wide variety of causes, diagnosis can often be … END_OF_DOCUMENT_TOKEN_TO_BE_REPLACED

You are what you eat! Your health is directly related to the types of foods that go into your … END_OF_DOCUMENT_TOKEN_TO_BE_REPLACED

This week, we’ll be hosting our first ever live Q&A webinar!  Walk with a Doc will be … END_OF_DOCUMENT_TOKEN_TO_BE_REPLACED